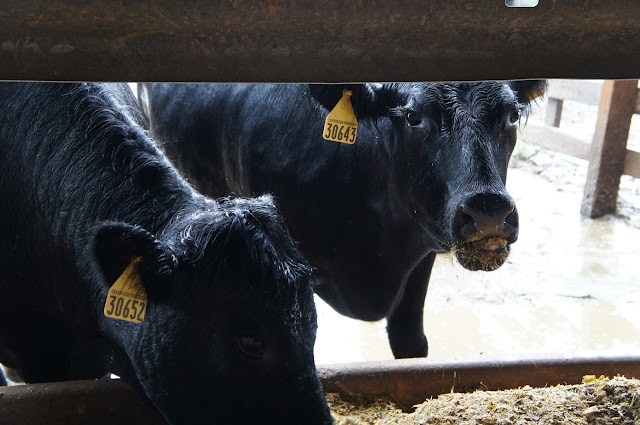 When I first got a message asking if I would like to attend Brasstown Beef's 1st Annual Poorhouse Mountain Picnic Farm Tour and Luncheon, I will admit, I squealed like a fangirl. It seemed almost as if the event had been created with me in mind, so perfectly did it blend all of my interests: responsible agriculture, family farming, the Atlanta and Asheville restaurant scenes. The reality was even better than I could have imagined.

I was fortunate that my friend Kevin Jenkins from Chef and the Fatman had also been invited to attend and he generously let me ride with him, as my car is getting a bit long in the tooth and I am hesitant to take it too far away from my mechanic's shop. When we set off on that dreary, drizzly morning, we debated the sanity of driving to North Carolina, when the weather forecast called for rain, rain and more rain, but we were in agreement that we wanted to support Steve and Whit Whitmire, because we really admire what they are trying to do up at Ridgefield Farms. 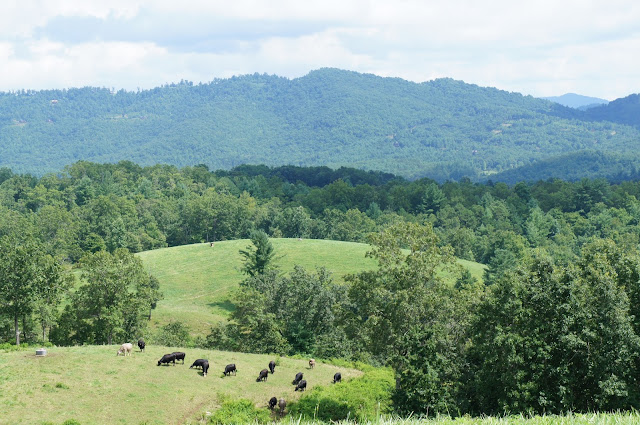 The beef at Brasstown Beef are Free Choice fed, meaning that they graze in the rolling green hills, but they also have access to a carefully formulated mixture of silage and corn, which will soon be non-GMO as they have just secured non-GMO seed that they are going to plant if it ever dries out enough to do so, dried distillers grain, probiotics, minerals, cinnamon, kelp and garlic. They are never given antibiotics or hormones. 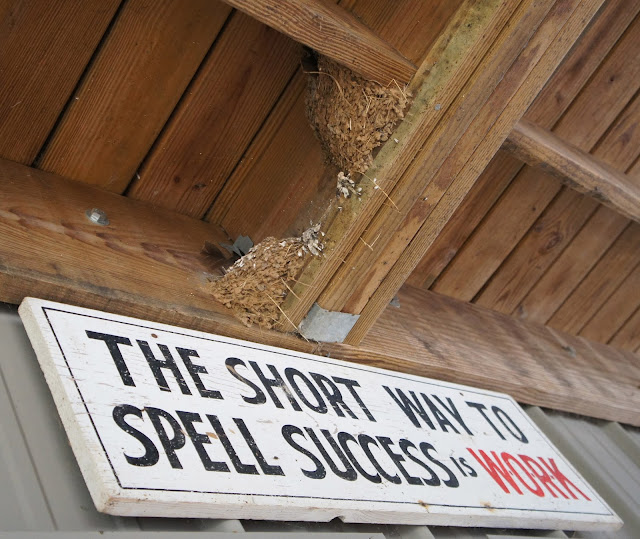 This really sums up the Whitmire's philosophy, they could have taken the easy way, Steve Whitmire had a successful commercial cattle operation, but in 1998 he chose instead to take the harder path and create an operation he could be proud of. Today their Braunvieh-Angus "BraunAngus" crossbreeding program is consistently producing some of the top beef that you can buy. Not only are they looking to produce the tastiest beef, but they are also looking to produce cows that require less feed per pound, reducing methane emissions, and select for bulls with excellent temperaments, for the safety of everyone on the farm. Their humane treatment of the animals has earned them a "Pasture Centered" Step 4 Rating from Global Animal Partnership. The only thing keeping them from having 5 stars is that they don't have a slaughter house on site, although the facility they use practices only the most humane slaughtering methods as well. 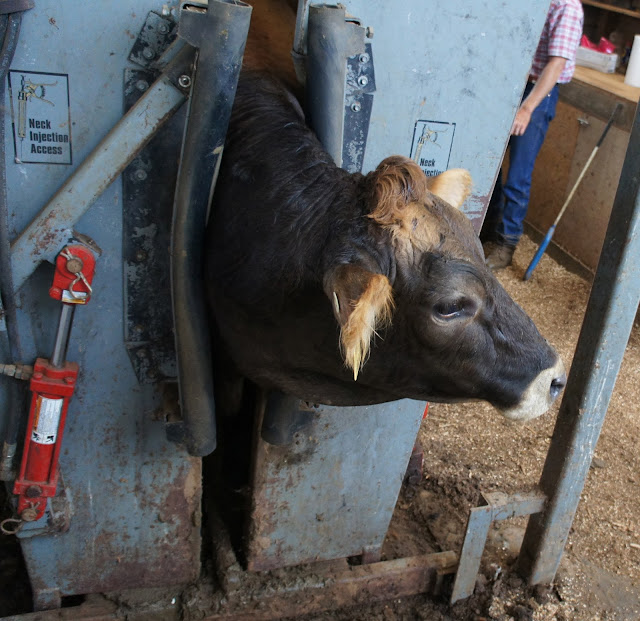 Just one of the extra steps that they take at Brasstown Beef to make sure you get the tastiest beef possible, ultrasounds of every animal. They look at the amount of back fat and marbling, as well as the size of the rib eyes and other cuts to determine if an animal is ready to slaughter. 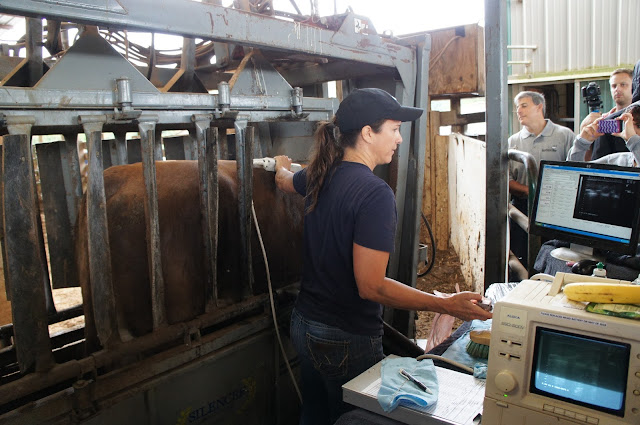 After the cow gets a quick haircut and squirt of vegetable oil, the ultrasound tech does her job and records the data. One of the attendees asked about the cost and she said it depends, but ultrasound techs can get $14-18 per head, so that is a substantial investment into making sure the beef is consistently excellent, as they may end up needing to be checked several times prior to slaughter. 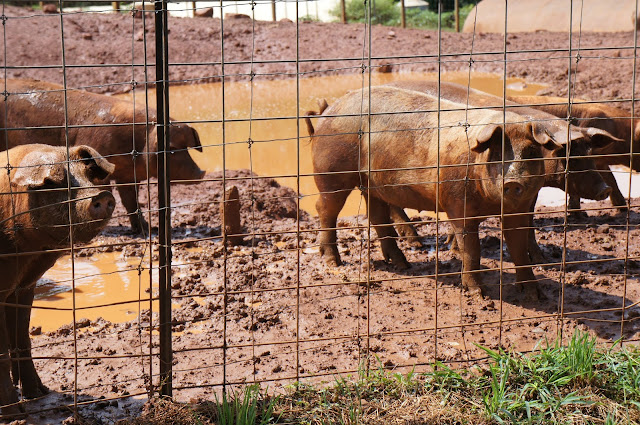 What you may not know about Brasstown Beef is that they are not just beef, they've also recently started a hog operation as well. You may notice their happy, curly tails, they don't dock them because they don't have to. Unlike most commercial producers whose animals are kept in crowded confinement these beauties are free to run around and wallow in their spacious pasture, so they don't develop destructive behavior, like tail biting. 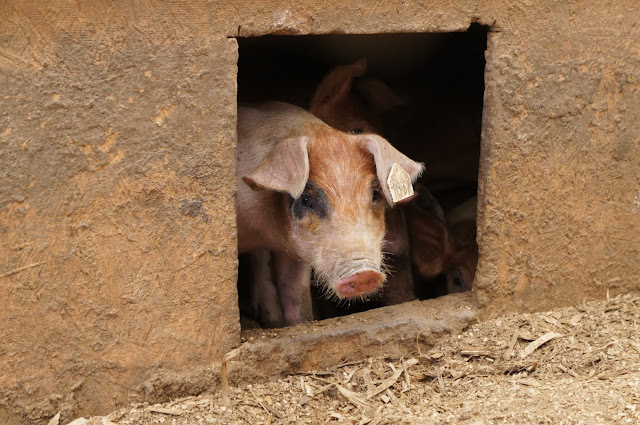 I took about 15 pictures of the adorable piglets, but I'll limit myself to sharing just these two. 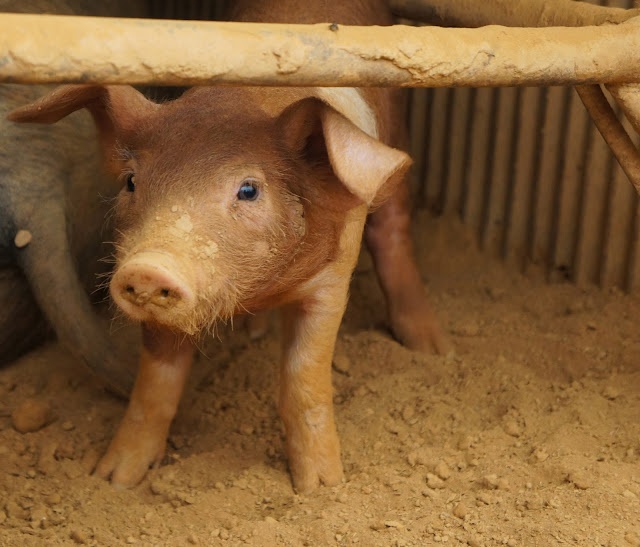 Unless you want to see more, then you can go see my whole set here. 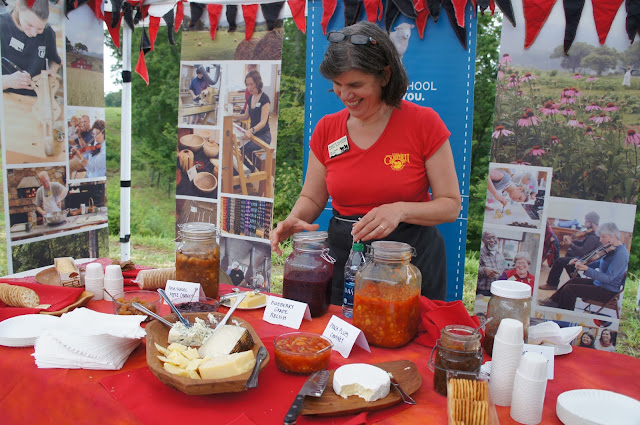 After our farm tour, we piled into cattle trailers pulled by tractors and headed up the mountain. We were greeted by folks from the John C. Campbell Folk School, one of the sponsors of the event. I have always wanted to attend the school and spend hours browsing the catalog, drooling over all of the amazing classes, each one sounding better than the last! Their cooking department offered a tasty selection of chutneys and things for us to sample, their blueberry grape relish was fantastic with the blue cheese. 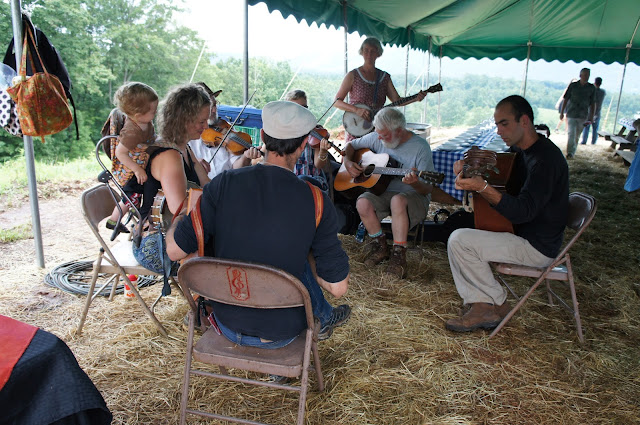 Some of their talented musicians playing bluegrass and other traditional tunes. 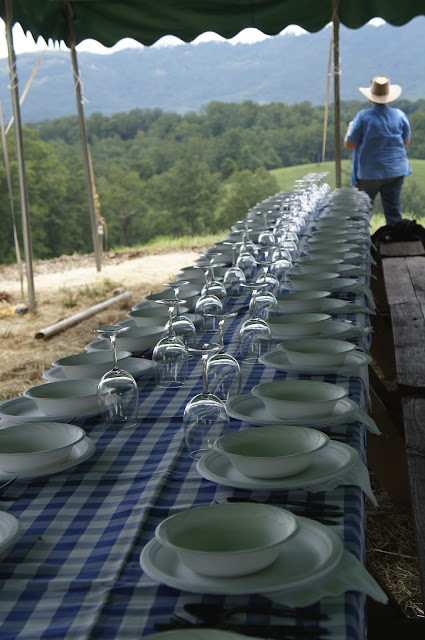 The cheerful, checked-cloth covered picnic tables overlooked the gently rolling hills and we were able to watch the cows grazing below as we ate. Obviously we didn't want to upset them, so we pretended it was a vegan feast. 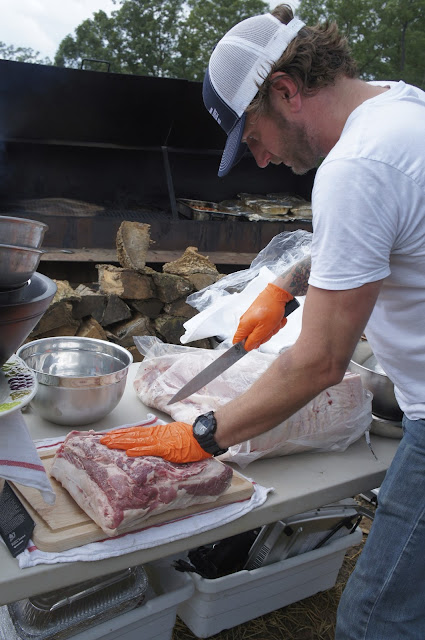 Chef Craig Richards of Dinner Party Atlanta was given some gorgeous Brasstown pork belly to work with. While family style dining is not so conducive to getting great pictures, I can tell you the final product, with pickled nectarines, smoked eggplant, Thai basil and pine nuts was one of those dishes you just kept picking at even though you were stuffed to the gills, especially those nectarines, pretty sure I ate a pint by myself. 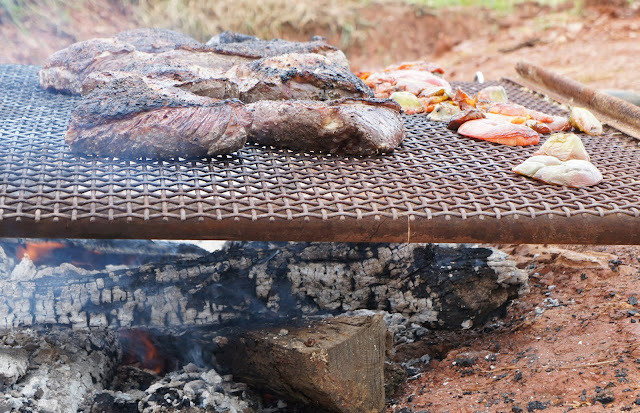 While I hate to play favorites, Chef Adam Hayes, from Red Stag at the Grand Bohemian Hotel in Asheville, made this wood fire roasted beef coulotte that pretty much made my taste buds explode with pleasure. 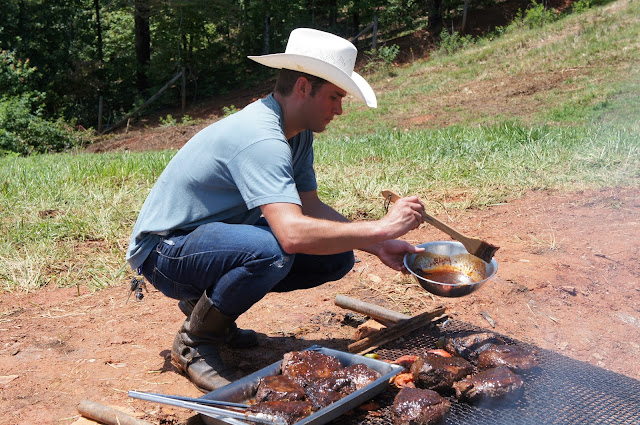 I admire his dedication to the meat, shortly after we arrived the rains cleared and the sun came out with a vengeance, easily reaching temps in the 90's, plus that fire was hot, but he made sure that every single piece was basted with his delicious balsamic steak sauce and cooked to perfection. 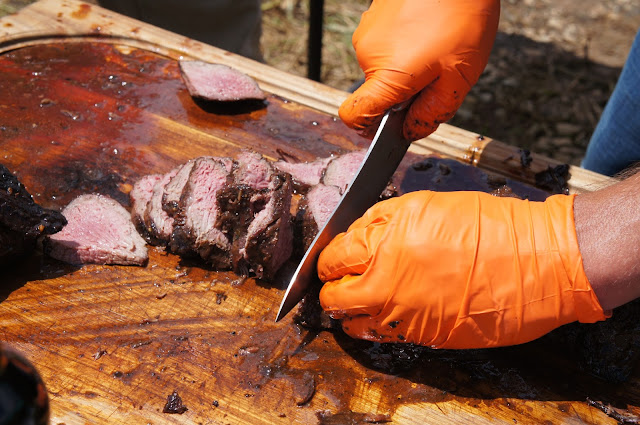 I don't think I'd ever tried coulotte before, but it is a really delicious cut, juicy, flavorful, especially when it comes from quality beef and is cooked by a master. Since I was standing there taking a few pictures, I may have been given a sample or two, strictly for quality control. I'm happy to report that I was able to give it my very highest seal of approval. 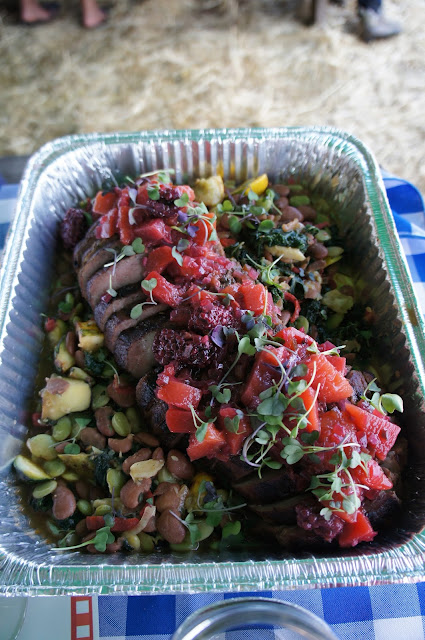 Chef William Dissen of The Market Place in Asheville did a pork shoulder with a butter bean and kale ragout, peach-blackberry relish and micro herbs. Fruit is always such a lovely accompaniment to pork. 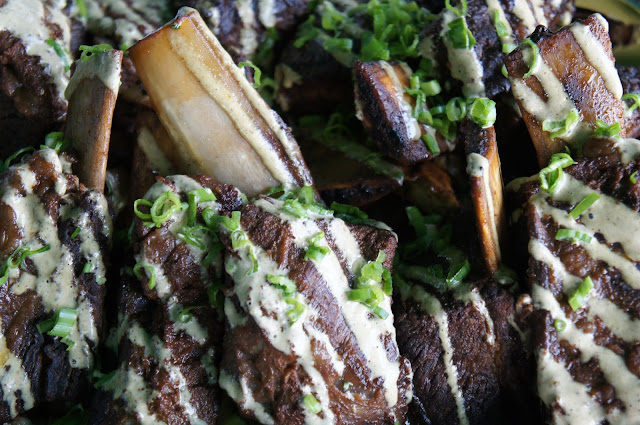 Matthew Richardson, Chef at Buckhead Beef in Atlanta, did a maple smoked beef short rib over a cloud-like, airy corn pudding (I would love to get that recipe!) with pickled onion and mushroom salad, drizzled with charred scallion white BBQ sauce. 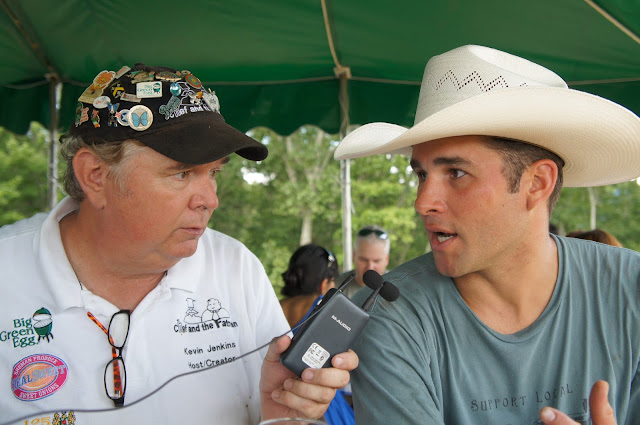 Kevin took advantage of the opportunity to have some of Asheville's most talented chefs on the show and from my side of the table, I thought they all did a great job. 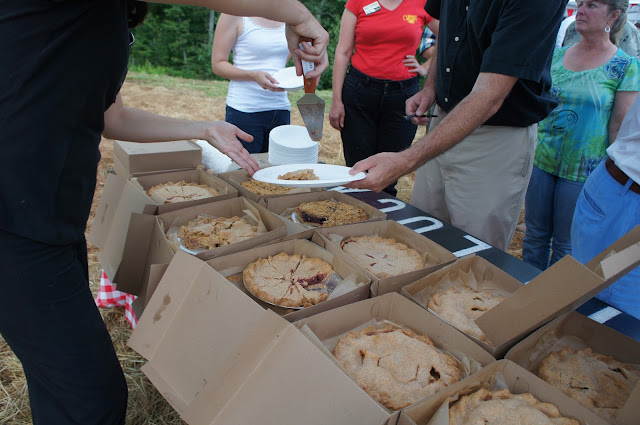 After all of the meat was cleared away, PieLocal and Honeysuckle Gelato, brought out dessert. Luckily, after these past couple of years of BBQ judging, I know how to pace myself and I can handle my meat, so I had plenty of room left to try the caramel-apple and the strawberry-rhubarb pies. 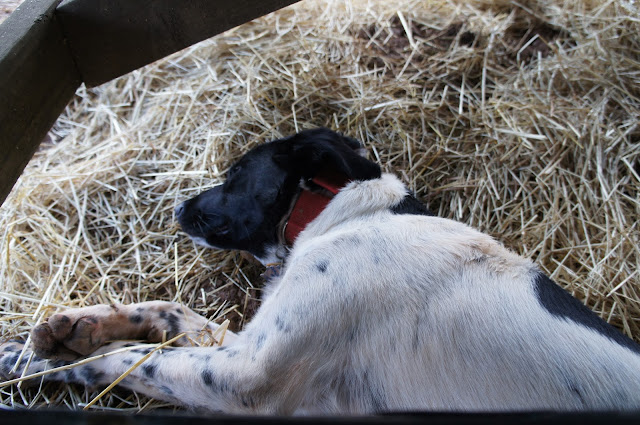 Whit's puppy Pito after a long hard day of escorting us all around the farm and making sure everyone had a wonderful time.

Whit and Steve are hoping to make this an annual event and I can guarantee you, I will be in attendance  if I have the opportunity to do so and I would strongly encourage all of you to do the same, it was a marvelous way to spend an afternoon in the country.
Posted by Emily R. at 10:00 AM