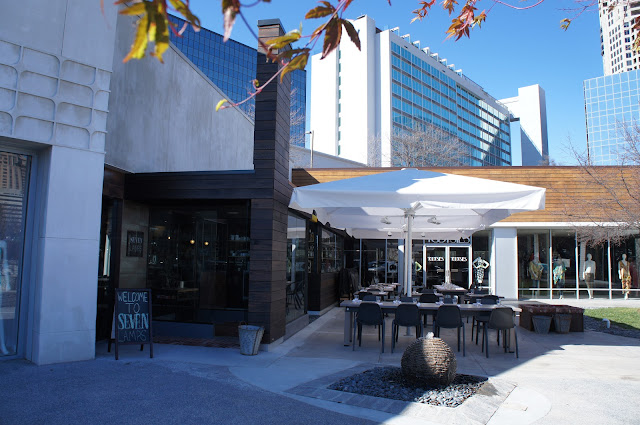 Tucked away in a corner of the Shops Around Lenox, which at first glance seems to contain only a bunch of women's clothing stores, is Atlanta's newest purveyor of craft food and cocktails, Seven Lamps. When I was invited to attend a media preview, I had actually already been on my own several times, so I debated whether or not to attend, but then the opportunity to taste more of the menu won out, so I happily RSVP'd yes. In the interests of full disclosure, I also have known Co-owner and Chef Drew van Leuvan for years, but he's more an acquaintance than a friend, and I think I can be objective. 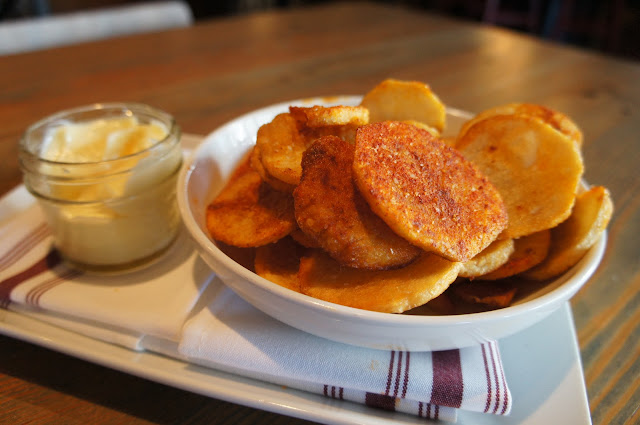 For instance, the Hand Cut Cottage fries with Duke's mayonaise were not a favorite of mine, I was hoping for Kyma's perfect golden potato discs, but these were a bit tough on the outside and dry in the middle. They were also served at the end of the meal roughly 10 minutes after we had finished our entree, but more on that later.

But rather than focus on that, let me tell you about the things that Seven Lamps does beautifully, like their handmade pastas, which, along with the rest of the menu, change according to season and chef's whim. And the soups that carry incredible flavors across your tongue and make you feel as if you are sipping on a spoonful of silky smooth cloud. Or the savory crepes stuffed with wood-grilled Tuscan kale and caramelized vidalia onions, covered in enough nutty melted gruyere to make your arteries harden, that somehow avoids being overly heavy, probably because of the bite from the smoked vinaigrette. 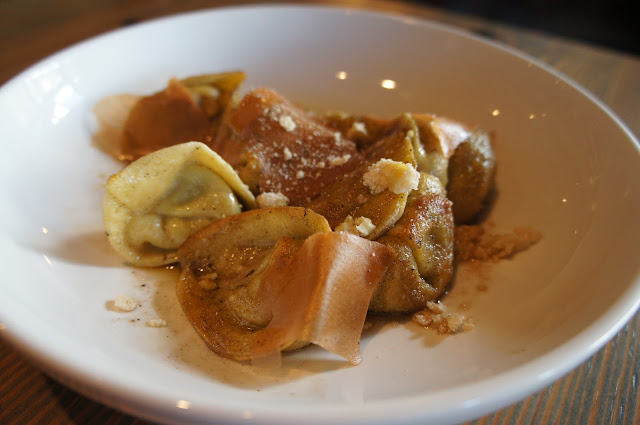 I had to order the roasted chestnut tortelloni with apple leather and vanilla macaron crumbs in brown butter, because I feel like chestnuts are such an under appreciated winter treat. The pasta was perfectly cooked and the chestnut stuffing was savory, the apple leather provided another layer of flavor and texture, with the only real sweetness coming from the macaron crumbs. This was clearly a main course, not a dessert wanna-be. 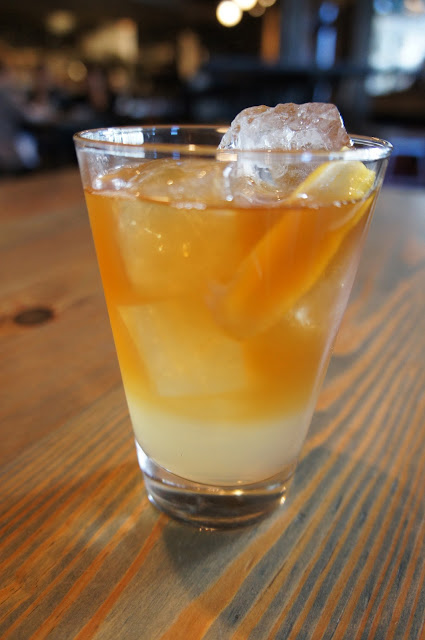 The Snow White made with gin, Berentzen Apple, Hitachino white ale, Savannah Bee Co honey and lemon. I wanted more honey taste and I felt like the flavor was a little diluted, despite the big ice cubes, but my brother liked it well enough. 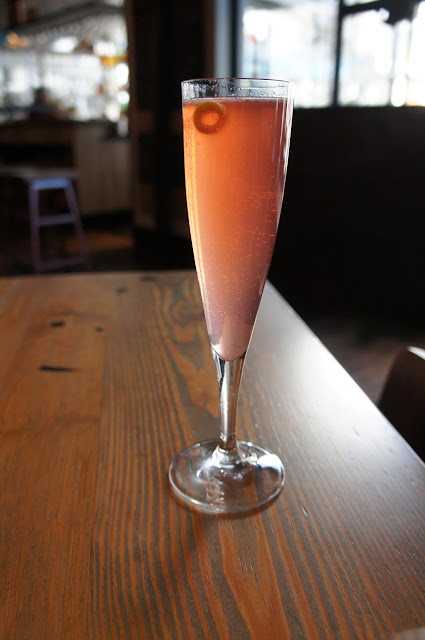 Lucy's Candle is still my favorite cocktail on the menu, with Krogstad Aquavit, Orchard Cherry Liquor, lemon and sparkling wine. It's so light and refreshing, but not cloyingly sweet, which would be easy to do with the cherry liquor. It's just lovely. 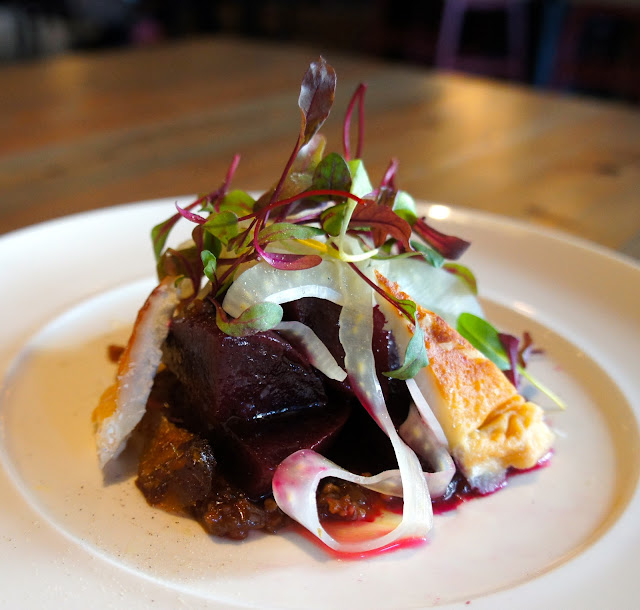 Another part of the menu that shines is the Small Plates section. Chef Drew's skill with beets can make a fan out of even the biggest beet detractor. I first fell for his incarnation on the menu at One Midtown Kitchen, but I have to say that this latest version is even better. You still have the orange juice cured fennel, but now the beets are smoked, there's a salty creaminess from the still-warm bucheron, and I even like the texture that the dates bring to the plate, and I'm not a date person. Did I mention the bacon jam? Yes, bacon jam! It goes with everything, including beet salad. I order this every time and hope that it is never taken off the menu. If it is, I will likely go into mourning. 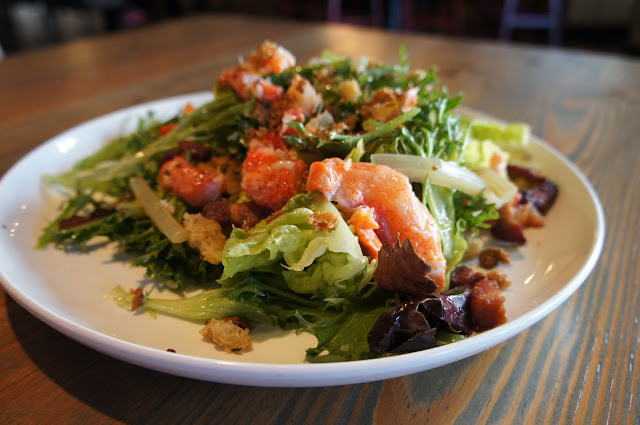 The coldwater lobster salad, which is a lunchtime option, features an enormous plate of the freshest local greens, that are practically still growing on the plate, beautifully poached lobster meat, buttery rustic hand-torn croutons, lardons of bacon, and, my personal favorite, crunchy-tart house pickled celery. I'm a big fan of acid and at first I felt as if the salad could use a bit more dressing, but when you compose a perfect bite with all of the flavors represented, you realize that it's exactly as it should be. 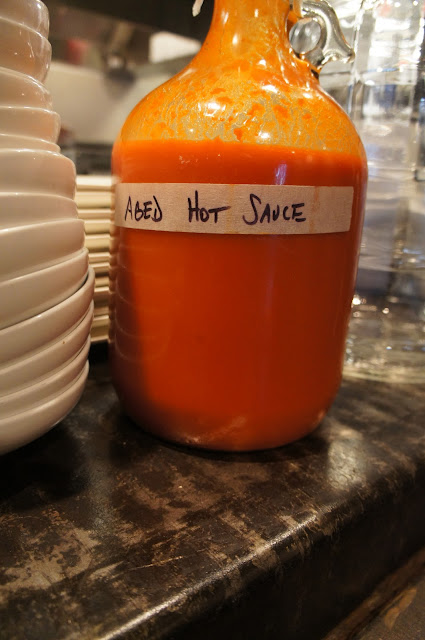 Although he could take shortcuts, Chef takes the time to make everything in house, from hot sauce, to macarons and fruit leather, this kind of attention to detail is evident in every plate. 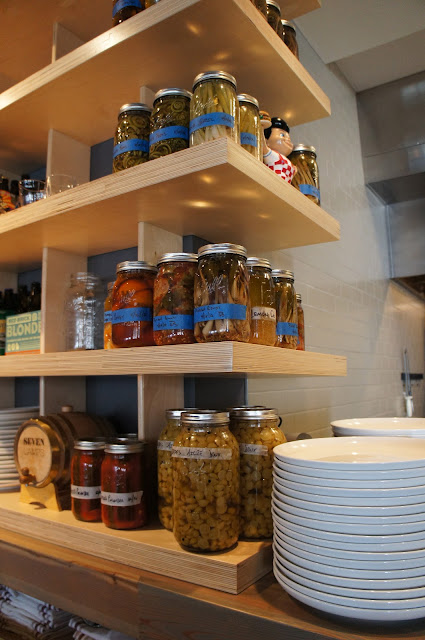 While there are lots of fun things on the lunch menu, including several sandwiches that are at the top of my current Must Taste List, I prefer going for dinner because I adore their amuse bouche of butter dipped radishes and house pickles. When many places aren't even doing bread service any more, the fact that Seven Lamps is putting out such a fantastic amuse bouche is even more impressive.

While I don't have pictures that do it justice, I would be remiss not to mention the buttered lobster bun. If you are a hard-core New England lobster roll person, this may not be for you, but if you love lobster and can keep an open mind, you might find that the pillowy soft steamed brioche is the perfect base to hold mounds of celery aioli dressed lobster scattered with micro cilantro.

In regards to service, I have had some issues, so I would highly recommend calling ahead and asking whether John Pak is working. If he is, request a table in his section, and get ready to enjoy an evening with one of the best servers in Atlanta. He is as knowledgeable about the menu as he is personable, and his enthusiasm for the restaurant is infectious. You will leave feeling as if you have made a new friend, and he will also have curated your dining experience perfectly to create the exact meal you were craving, without you even realizing it.

Monday, February 25, 2013
7:30PM-10:00PM
Foodspotting Atlanta will collide with the Atlanta participants of #FoodieChats on Twitter as we get together to eat, drink and tweet.
Posted by Emily R. at 1:00 PM