As you may know, I'm a big fan of the #SundaySupper movement created by Isabel of Family Foodie and try to participate as often as possible. With my hectic schedule, that's not as often as I might like, but, when I found out we were teaming up with LAND O LAKES® this week, I knew I had to make the time. We were asked to create Simple and Fresh Summer Recipes using one of their newest products Olive Oil & Sea Salt butter. As someone who loves butter, I could not wait to try it out. I knew that I wanted to come up with a recipe that highlighted what's different about this butter, the fact that it has a higher smoke point than traditional butter, so I decided to make butter burgers.

Form beef into 4 patties and liberally season with salt and pepper. Melt 1 tbs butter over medium heat in a large skillet and toast 2 buns cut side down until golden brown, remove, remove to a platter and repeat with remaining buns. Once buns are toasted and set aside, add remaining butter to pan. Add burger patties and cook until desired level of doneness is reached, flipping once. Place one patty on each bun, top with fresh tomatoes, salt and pepper if needed. Serve immediately. If you would like to learn more about LAND O LAKES® Butter with Olive Oil & Sea Salt you can check out their web page htttp://www.landolakes.com/ButterWithOliveOilandSeaSalt/, Facebook page http://www.facebook.com/LandOLakes or look them up on Twitter @LandOLakesKtchn. If you would like to taste it for yourself, I will be giving away a coupon for a free pound to the reader who posts the most delicious thing they like to make with butter. Also, please check out the other #SundaySupper bloggers for more great ways to use this butter and another chance to win the coupon!
Disclosure: The author received a full-value coupon redeemable for LAND O LAKES® Butter with Olive Oil & Sea Salt, for recipe development and review purposes. All opinions are my own.
Posted by Emily R. at 3:00 AM 18 comments: Links to this post For those who know me well, my pickiness when it comes to food is legendary. Sometimes it is easier to just list what I want left in a dish than to rattle through all the things I want left off or changed. Yes, I am one of those people. Some of it is food allergies, but mainly it's that I just can't stand certain things, flavors, smells, and most of all, textures. If you were a lawyer, you would probably be objecting on the grounds of relevance right about now, but I do have a point, I promise. The point is that the newly opened STG Trattoria in Buckhead has the best panna cotta that I have ever had in my life. Ever. 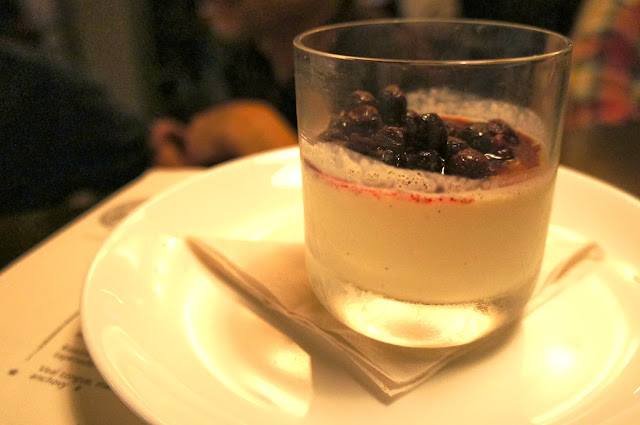 It's so easy to make a mess of panna cotta, despite it being such a simple dish. I've had panna cottas that were as loose as pudding and versions that were so gelled they would have bounced off any wall they were thrown at, but a good panna cotta will hold it's shape on the spoon, but dissolve on your tongue. STG has accomplished this perfectly. The version I had was topped with wood oven roasted blueberries, but I would imagine it would be just as delectable served plain. Of course, they don't just use the wood-fired Acunto ovens imported from Naples to roast blueberries, they also use them to bake bread, like used in the bruschetta above. The one on the right was topped with an incredibly buttery pea puree, prosciutto and marinated mozzarella, while the left had tapenade, wood roasted mushrooms and fresh radish. The menu changes frequently, but you won't regret ordering whichever incarnation of toast they have listed when you go. 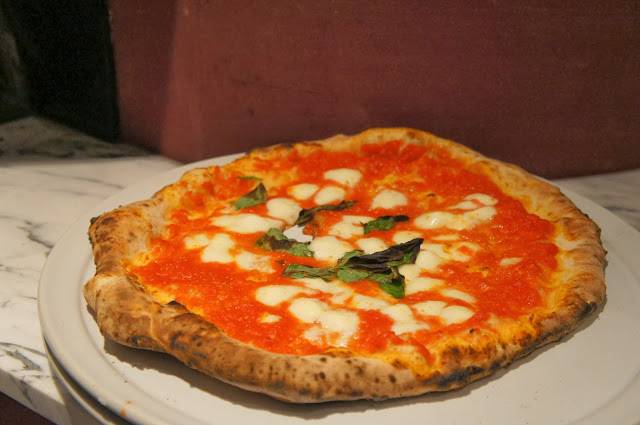 The pizzas are the real superstars of the ovens and are certainly in contention for the best pies in town. They don't skimp on toppings and have some unique combinations, but luckily their dough holds up well against even the wettest ingredients so you won't be left trying to spoon up a pile of goo, this is pizza you can eat by the slice, no fork and knife required. I'm also a big fan of their aperitif heavy cocktail menu, low alcohol, light, flavorful cocktails that are perfect for summer sipping, it's easy to find yourself ordering more than one. My current favorite is the Barolo Ginger with cocchi barolo china to, lemon, grapefruit bitters, fever tree ginger ale and lemon peel, try one and you'll see why.