A Last Meal to Remember 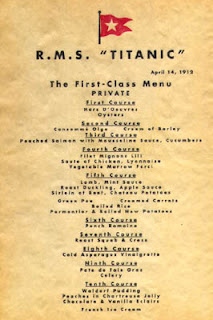 When I was in Ireland last fall, I was able to visit the Cobh Heritage Centre in County Cork where they had an exhibition on Building the Titanic. Cobh was the last port of call as the Titanic set off on her fateful maiden voyage. It was fascinating to get a glimpse into life on board such a vessel. I, of course, was immediately drawn to the section devoted to dining on board the ship. There is very little information available about what was served, although some survivors of the disaster had copies of menus tucked away when they were rescued. In fact, a copy of a First Class luncheon menu given to a Dr. Washington Dodge, carried to safety by his wife, Mrs. Ruth Dodge, is expected to fetch around $157,000 at auction later this month. There is also in existence a copy of the First Class dinner menu from the night of April 14th.

As this year marks the centennial of the biggest peace time maritime disaster, I thought it might be interesting to try to recreate as much as possible of that final supper. When I submitted my proposal to do just that for FoodBuzz's March 24 x 24, I was thrilled to find that I had been selected to participate. 24 x 24 is a group of 24 bloggers worldwide, who all host a creative, over-the-top party on the same day -this month it was Saturday, March 24, 2012, then blog about it. FoodBuzz is generous enough to offer a stipend to help cover expenses for the meal.

I'll be honest, I've never attempted to make and serve a meal with that many courses before, and the process was not without a few challenges, but I was overall very happy with the final result. The last meal was as follows:

Because I was serving a group of 6 friends, not 325 people, I decided not to make every dish noted. I intended to serve the seventh course, Roast Squab & Cress, but had to strike it off the list as I was unable to source squab locally and was disinclined to take matters into my own hands and try to bag a few myself. I willingly skipped the ninth course as the thought of eating Pate de Foie Gras with celery immediately before dessert turned my stomach. I made the highlighted menu items, but gave them a little bit of a 21st century update.

To avoid this post being even longer than it already is, I will be posting recipes separately and linking them back to this post. If you don't see the one you want, just keep checking back, I hope to have them all up eventually.

First Course
Hors d'Oeuvres
As the menu was not specific as to exactly what was served, I went online to find out what typical hors d'oeuvres were at the turn of the century. I found a likely candidate in the Century Cook Book - Ham Canapes. These were ham paste spread on fried bread, topped with a bit of cheese and broiled. They were simple, but quite tasty. Second Course
Cream of Barley
The period appropriate versions all sounded a bit bland and prison-like, but then I discovered the Persian soup Ash-e-jow. A barley soup, but this version is kicked up with turmeric and lime and gets its creaminess from sour cream. This was a real winner as I just threw the ingredients into the slow cooker until it was time to stir in the sour cream and serve. Third Course
Poached Salmon with Mousseline Sauce, Cucumbers
I decided to serve this as a canapé as well, just to minimize the amount of food we were all consuming. Turns out Mousseline sauce is amazing, basically a hollandaise with whipped cream folded in. Even though my hollandaise broke due to double boiler issues, when I added the cream in, it became a perfect sauce. I will be adding this to my repertoire. Fourth Course
Vegetable Marrow Farci
Marrow is a British summer squash, which can grow as large as a watermelon, but I have never seen it stateside, so I substituted it's cousin, the zucchini. Farci simply means stuffed, while I contemplated doing a stuffing of sausage, or perhaps lacing it with bacon, I decided to honor the intention of providing a vegetarian option and instead chose to sautee oyster, crimini & portabello mushrooms with zucchini, tomatoes and basil herbed bread crumbs, to fill my baby zucchini. I roasted a couple of lamb shanks rubbed with Moroccan spices including coriander, cumin, cinnamon, ginger, paprika and turmeric. I chose shanks because that way I could please both the rare meat eaters and those who prefer well done, the spice rub added a lot of flavor and went very well with the cilantro-mint sauce. I don't know why more people don't serve creamed carrots, as it was an excellent preparation. I simply boiled them with a few knobs of ginger, then tossed them in a béchamel sauce that I made extra rich by adding heavy cream as well as milk. They were so good! I think that next time I may try roasting them instead of boiling them to bring out all of their natural sweetness. The starch options served on board seemed a bit on the bland side, I knew I wouldn't be serving boiled rice, but the Parmentier Potatoes, 1 cm diced cubed potatoes fried in butter, had potential. That still seemed a bit boring, until I found a recipe that added chopped fresh parsley, cilantro and mint, with lemon zest and juice. That went much better with my take on the menu. Seventh Course
Punch Romaine
Punch Romaine was served as a palate cleanser, this drink has been around since at least the mid nineteenth century, and possibly even earlier and once I tasted it, I knew why. The combination of icy bright Ciao Bella Lemon Zest sorbet, chilled rum and champagne, topped with creamy Italian meringue is delicious! I can see this becoming a summer time favorite at my house.

Eighth Course
Cold Asparagus Vinaigrette
I simply roasted some asparagus in a hot oven with a drizzle of extra virgin olive oil, salt and pepper. One of only two dishes I prepared the day before, the ice cream being the other, this was a snap to serve as I decided to top it with the same cilantro-mint sauce used on the lamb, to delicious results. My first attempt at eclairs turned out surprisingly well, although the recipe I used would have left them burned beyond recognition, I had experienced kitchen help who encouraged me to pull them out early, thus averting disaster. They were stuffed with Patron XO Cafe and honey laced whipped cream and topped with bittersweet chocolate ganache, thanks to my friend Brooke who jumped in and finished them for me. The Five-Spice ice cream I found on Epicurious was a great complement with its warming blend of dried orange peel, black and pink peppercorns, star anise and cloves a nice contrast to the creamy cold custard. My friend Dan's fabulous ice cream maker did a great job freezing it into the perfect consistency. Cheese Course
I tried not to go overboard with the cheese course, although I love cheese, so went with a brie, some herbed goat cheese and a nice piece of Parrano. Perfect with some grapes and dried apricots, they got nibbled on as we sat around the table sipping champagne and talking late into the night. I am so glad that FoodBuzz helped me bring this wonderful dinner party to life. It was one of the best meals I have ever cooked and I think all of my guests would agree with me when I say that it was incredibly delicious. You certainly couldn't eat like this every day, but it really wouldn't be bad to have as your last meal on earth.
Posted by Emily R. at 6:30 PM