This was the first year of having Christmas at my new house, last year being out of the question because I had just moved in and the place was a disaster area (not that I am completely unpacked now, more than a year later, but that's another post). As I was hosting, I decided that gave me complete control over the menu, which meant roasting a turkey. To know why that's a big deal, you have to know that my father can't stand turkey and my mother claims to be allergic to the smell of it cooking, but this is my house, my rules. In retrospect, as my house still smells like Christmas dinner, my mother may be right, and as I overcooked the turkey grossly, my father maybe right, but that doesn't change the fact that I love turkey and finally got the opportunity to roast one. 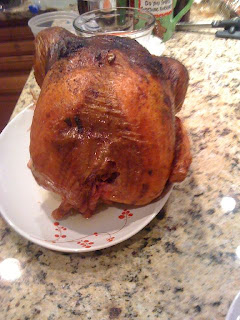 My dad still doesn't quite understand my need to photograph everything I cook or eat for potential blog posts, so this picture was taken after he had carved the wing off, and no he wouldn't let me try to reattach it with toothpicks. It was 9:00PM, so maybe he had a point. I will be the first to admit that it was dry, like the Sahara, despite the stick of butter I stuffed under the skin, with my own sage that I picked from beneath the snow. However, with enough gravy and cranberry sauce you can choke most anything down.

Then comes the next ordeal, what do you do with the leftovers from a 14 pound turkey, when there are only 4 people at dinner and it is drier than dust? 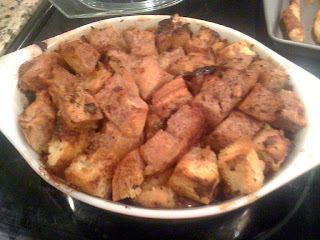 The good news is I was able to stash it outside for a day or two to deliberate due to the subarctic temperatures. I came up with turkey pot pie two ways and turkey soup. One pot pie was topped with leftover stuffing, made with fennel, roasted lemons, and pine nuts - one of the best stuffings I have ever eaten (recipe courtesy of Epicurious). 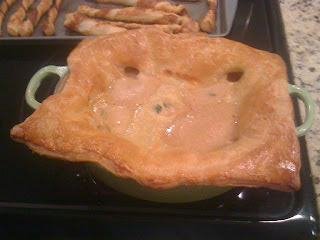 The other was topped by DuFour puff pastry from Whole Foods, which at $11.99 better be amazing, but it does not disappoint. As I had some leftover, I made some Old Bay flavored cheese straws, so tasty to snack on while you wait for your pot pie to cool enough to eat. I made the mistake of cutting vent holes into the top of the pastry, allowing the sauce to come through and weigh down the top, inhibiting puffing, but that didn't keep it from tasting delicious. The sauce 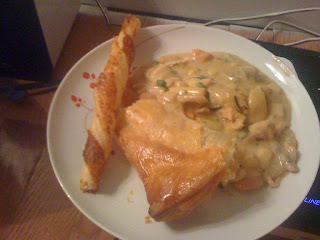 was inspired by one in the DK Chicken cookbook written by Anne Willan, so you can imagine how good it was, and it successfully transformed the turkey into something palatable, so double win! 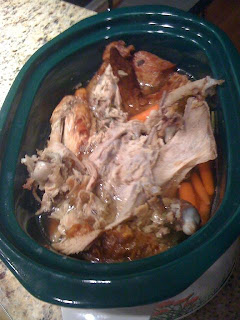 Even after I had stuffed as much meat as possible into the two pot pies, I still had tons leftover, so I decided to stuff the carcass into the crockpot and start a soup. This turned out to be another good way to use up meat, with orzo and carrots and more fennel, although the texture of the dry meat wasn't concealed nearly as well as when it was covered with a sauce full of butter and heavy cream.

Now dear reader, what holiday mishaps did you have in your kitchen and how did you save them from being a complete disaster?
Posted by Emily R. at 5:35 PM