Basic to Brilliant, Y'all 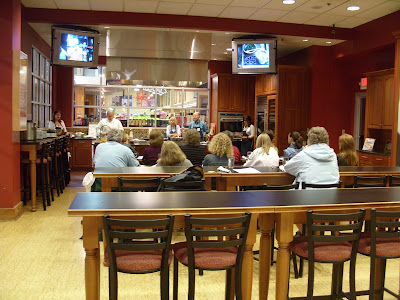 I really ought to know better than to plan to do something at 7:00PM on a week night in Atlanta. This was one of those days where it just grizzles all day long with the odd tornado warning, thus rendering the entire population incapable of driving. Even though I left work 15 minutes early, we were still almost 20 minutes late to class and there were times as I sat staring at the miles of unmoving tail lights that I considered throwing in the towel 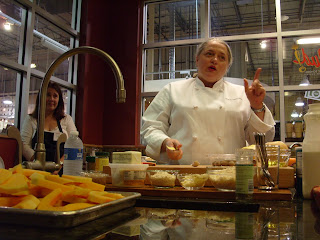 and going home. I'm so glad I persevered as this was one of the most enjoyable cooking classes I have ever taken.

This was my first class at the Salud at the old Harry's, now Whole Foods, in Alpharetta. It's a really great class atmosphere - I appreciated sitting at a table as I was able to take notes and enjoy my tasty samples without having to balance things on my knees, plus the raised seats in the back and big screens meant that everyone had a great view of the action.

The instructor for this particular class, and the reason we braved the traffic, was Virginia Willis. 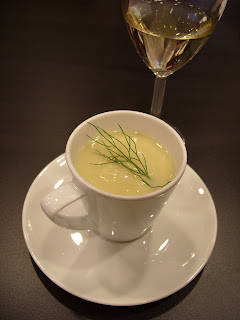 She is truly one of the nicest, most genuine people you will ever meet and it is truly worth braving any storm to see her. In this class we were especially lucky to be able to try some of the dishes from her next cookbook Basic to Brilliant, Y'all coming out in September '11 and taste some of the products from her new line called My Southern Pantry.

The class was called Entertaining Fall Flavors and featured a great line-up of recipes that I already have plans to recreate at home. The first course was a potato & celeriac soup with fennel that had us all scraping our cups clean. Then we moved onto the main course, a tender grass-fed skirt steak from White Oak Pastures rubbed with French Quarter Spice Rub from My Southern Pantry. I love that spice blend, it has powdered Tabasco peppers, 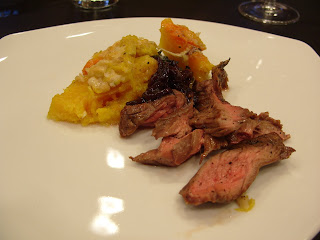 Chickory coffee and all kinds of other flavors that complemented the meat to perfection. The steak was accompanied by a kale and butternut squash gratin that would have had me asking for seconds, except one pan didn't cook completely for some reason. I like that she blanched the kale, then sauteed it with garlic, so it added a great flavor to the gratin. It will definitely be making an appearance at my Thanksgiving table this year and most likely for years to come. 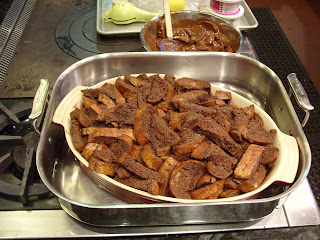 As if all of that weren't enough, we even got dessert, a bittersweet chocolate bread pudding served with homemade caramel sauce and creme fraiche, the perfect ending to a fun evening.

I know that Virginia Willis has several classes coming up at Cook's Warehouse, as well as doing a demo at the Peachtree Road Farmers Market on November 13, so there is no excuse not to go out and learn everything you can from her. Your friends and family will thank you.
Posted by Emily R. at 4:30 PM