Afternoon in the Country 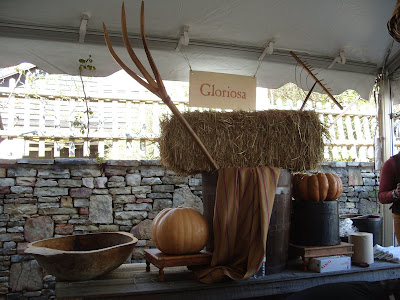 Les Dames d'Escoffier Atlanta has an annual fundraiser that I have attended religiously. It has long been my favorite food event of the year, something I look forward to for the 364 days leading up to it. This year, though, was different. 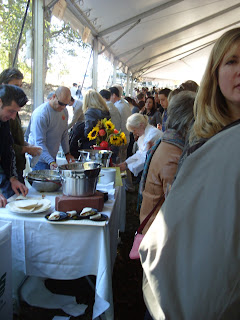 It was much more crowded than it has been in years past, to the point where you just stood there yelling "excuse me" to be heard over the din as you tried to squeeze through the throng of people standing around talking. I don't know if they sold more tickets than in years past, or if everyone just all showed up at one time, but it really took away a lot of the enjoyment for me. As a short person, this was basically my view the whole time.

One of the best things about this event is that so many of the best restaurants participate. It can be a useful tool for charting out where your dining dollars should be spent over the next year. This year I didn't have a favorite bite, which is odd, because there are things from last year or longer ago that I still remember and crave. 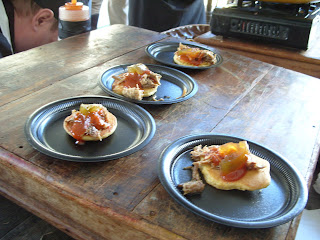 Last year it was Tom Harvey of Murphy's insanely good pork and apple dumplings in this rich pork jus. Then there was the year that Park 75 had the mini pumpkin whoopie pies, that was years ago as they were made by David Jeffries who has moved onto bigger and better things. This year there were tasty things, but nothing that will haunt me for years to come.

One of the first bites I enjoyed was pulled pork on a corncake with sweet pickled green tomatoes from Gloriosa. It was simple, but well executed, and their set-up was my favorite in terms of design. 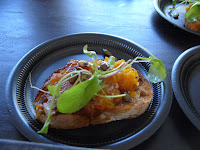 that hit all the right notes, was the African squash and pepitas bruschetta that had a bright mustardy vinaigrette to kick your tastebuds into high gear from Floataway Cafe.

Then I discovered the roast pork and collard green strudel, another tasty mouthful from Tom Harvey at Murphy's. 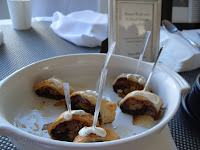 It had perfectly flaky phyllo dough wrapped around the pork, collards, and root vegetables drizzled with a spicy mayo based sauce. It was great for an event like this because it was bite-sized and very easy to pop into your mouth. 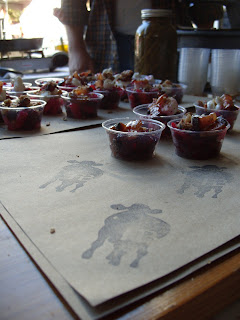 Along the lines of sometimes the simplest things are the best things, I have to admit that I thought the falafel from Alon's was one of the best I've ever eaten, from the perfect house-made pita to the crunchy pickles, I wish I had had room to eat more of them. Another winner in that category were the beets from Farm Burger, perfect in season beets, a little goat cheese, a little bacon, you really can't go wrong.

The most whimsical item, the deconstructed sweet potato souffle skewers. 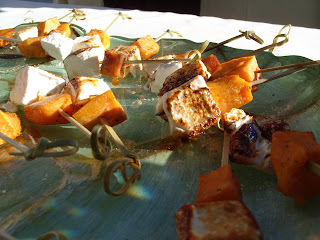 These things were seriously cute and so clever! Chunks of roasted sweet potato and homemade rosemary flavored marshmallows that were toasted as you watched. If this is the kind of food that Jon Wolf will be bringing to the food at Terrace on Peachtree
in the Ellis Hotel when he takes over in December, I can't wait to see what he will come up with next.
Posted by Emily R. at 6:16 PM