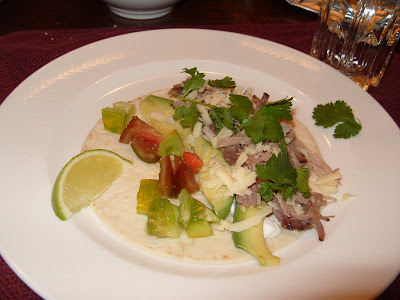 This past holiday weekend, I saw a high school friend's blog post on pork shoulder in a slow cooker http://pesteredchef.blogspot.com/2010/09/pork-week.html come up in my facebook feed, which inspired me to try to make my own carnitas. It turned out even better than I could have imagined. When I went to Publix to get the pig, I couldn't decide between the half picnic and the Boston butt, so I bought both, nearly 10 pounds in all. 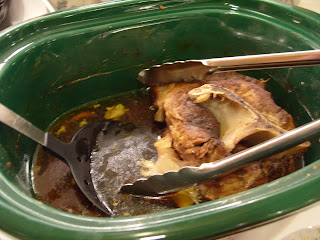 whole process couldn't have been any easier, I just rinsed the pork off, then rubbed in a couple of handfuls of Penzeys Fajita Spice and stuck it in my slow cooker on high for what ended up being about 9 hours, turning once near the end. I have to admit to being sceptical of putting it in dry, as I have previously always done braises and things with added broths or wines, but as you can see, the pork made plenty of liquid on its own.

I really took my time pulling the pork, to get out 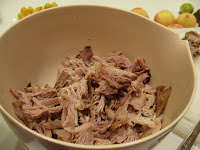 as much fat as possible, but still ended up with pounds of meat that I moistened with some of the juice from the slow cooker, also strained of its fat, although the meat was so succulent and juicy, that wasn't really necessary.

Of course, one of the best par 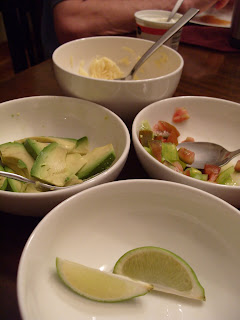 ts about doing tacos is the condiments. In this case, I had some Green Zebra tomatoes from my garden, which are super tart and zingy, some nice Extra Sharp Cabot Cheddar, a few perfect slices of avocado, and a lime wedge or two to brighten the whole thing up. I personally adore cilantro and piled it high, but that can be skipped if you don't have that gene. The only thing missing were some of my purple jalapenos, but I forgot to pick some when I was packing everything to take to my parents house where I was cooking dinner. The good thing is, there are plenty of leftover and my next taco or carnitas quesadilla will most certainly have a spicy purple kick.
Posted by Emily R. at 6:27 PM 1 comment: Links to this post