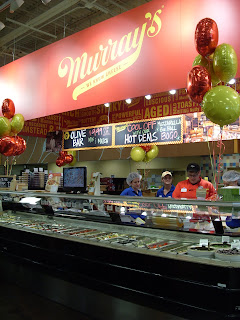 On Monday I was lucky enough to be able to attend one of Murray's Cheese famous Cheese 101 classes. Murray's is an institution, started in 1940, they have been sourcing some of the very best cheeses from both here and abroad and making them available to the public. It has been a lifetime goal of mine to attend their intensive Cheese Boot Camp, which spans a 3 day period and includes tastings of some 80 cheeses as well as tours of their in-house cheese caves, but as that takes place at their shop in New York, I was happy to settle for Cheese 101 taught by the incredibly knowledgeable Liz Thorpe at Sandy Springs Kroger.

If you haven't been to this Kroger lately, you will probably be pleasantly surprised to see all of the changes they have made, including the addition of the Murray's outpost, which will also be featured in 5 other Kroger locations by the end of the year. The new cheese center has hundreds of different cheeses on offer, with different things rotating in and out, as well as a really nice bar
with pickled and cured veggies, salads and dips, everything you need for a last minute party. I actually didn't have that much time to look around before we were lead to our classroom, so I definitely plan to come back and browse and taste when I have more time. 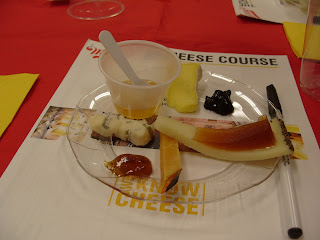 When we got upstairs we found that we were tasting four cheeses, starting from mildest to strongest with accompaniments. We started local with Sweet Grass Dairy's Green Hill, a soft-ripened cows milk cheese similar in style to a camembert paired with an outstanding sour cherry preserve. Next we jumped across the Atlantic to Spain and tasted a fairly young (according to Liz) manchego, which is an aged sheeps milk cheese. You can tell its sheeps milk because of the buttery mouthfeel, as their milkfat content is double that of cows and goats. It was paired with the traditional quince paste.

Then we moved on to the Reypenaer, an aged Dutch gouda, which if you want to be pretentious, 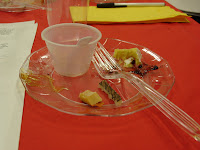 you can pronounce correctly as how-dah. It's incredibly nutty with great crunchy crystalline structure that pairs nicely with the sweet and seedy fig preserves. Last, but certainly not least, we sampled a gorgonzola dolce, an incredibly rich, but fairly mild blue. A friend who was also at the tasting, offered me hers, but when I insisted she at least try it first, quickly became a convert. It didn't hurt that it was paired with some of Savannah Bee Company's incredible Tupelo honey. I would have been happy to stay and try 76 more, but unfortunately, there wasn't time for that. Maybe one day I will make it to New York for Boot Camp, but until then this was a great substitute.

Murray's will be having another Cheese 101 at the Alpharetta store at 10945 State Bridge Rd this Monday 8/16 at 5:o0 PM and there are still seats available. If you are interested, you can RSVP
Posted by Emily R. at 6:41 PM