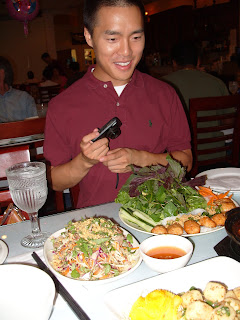 On a recent rainy Friday night (is there any other kind in Atlanta lately?) I took the recommendation of Blissful Glutton, http://blissfulglutton.com/, who claimed this is the best Vietnamese in Atlanta, and headed down Jimmy Carter with my friends Addy and Daniel to try out Nam Phuong.

If you are familiar with the Hong Kong shopping center, you probably know why I wasn't expecting much in the way of ambiance, but instead I was surprised by how pretty the place was, and how packed, although that was quickly explained after tasting the food. They have a bar area and really nice restrooms, which are a double bonus in the ethnic restaurant realm.

As we are all yelpers, there were lots of pictures being taken as food was brought out to the table. We ordered the Banh Hoi Chao Tom or Vermicelli with ground shrimp and sugar cane, which was really delicious and a good sized portion. Our server didn't want to let me order it, he said I wouldn't like the sauce that he described as sticky or stinky, I'm not sure which, but I insisted and was delighted to have the chance to play with my food as I wrapped up my rolls of shrimp and noodles and veg with the rice paper that kept attaching itself to me like the tentacles on a giant squid. The sauce was both sticky and stinky, but it was also quite tasty, with tons of bright lime flavor.

We also got the Goi vit (Duck salad), which was a cabbage based 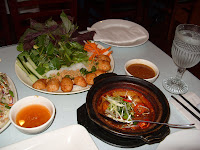 salad with a few cold, gray chunks of fatty duck scattered through; the Ca kho to (Caramelized catfish fillet in clay pot), which had an addictive sauce with nicely cooked sweet catfish, but there were only 6 chicken nugget sized pieces, which didn't seem reasonable given that it was listed as an entree and had an $8.95 price tag. It was also supposed to come with rice, although we weren't brought any until I noticed it was missing almost at the end of our meal. 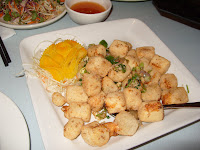 (Salt and pepper tofu) which was battered and fried and burst in your mouth like eating fried custard. Admittedly it is on the mild side, but it was easy enough to punch up with the various sauces on the table. My favorite was dragging it through the empty catfish clay pot.

Given the proximity of this place to my new house and the affordable menu, I expect I will be visiting on a regular basis and can't wait to try out more menu items and see what other things they have to offer.
Posted by Emily R. at 6:53 PM 3 comments: Links to this post