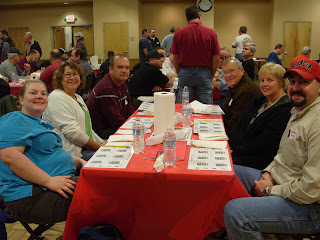 This past weekend I finally got around to doing something I have been wanting to do for a long time. Was it discovering a cure for cancer? Or painting a masterpiece? No, it was something way better =) I became certified as a Kansas City Barbeque Society (KCBS) Judge. That means I am now qualified to judge any of the incredible events they sanction like Smoke on the Water in Little Rock and the super-prestigious, invitation only Royal BBQ, held, where else?, Kansas City.

This is the big leagues, kids, this is the stuff you watch on BBQ Pitmasters, and now I am a part of it. I would say there were about 80 of us that turned up Saturday morning at the Ben Robertson Community Center in Kennesaw, also the home of the Peaches & Pigs BBQ Festival http://www.kennesaw-ga.gov/index.aspx?NID=333, with the warning "A large breakfast is NOT recommended". The KCBS Rep who was teaching the class was Ron Harwell and he was incredibly informative and happily answered our millions of questions about the process of judging Chicken, Ribs, Pork and Brisket.

Then the real fun started as we were presented with our very own "mock BBQ contest" to judge, 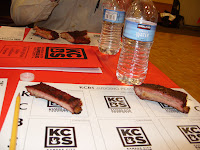 with more than one red herring (or red leaf lettuce) designed to trick us up. Our first meat was chicken and I got a slice of breast, a drumstick, and a thigh. The thigh was my personal favorite, but man was that thing greasy! Of course, I was really waiting for the ribs and they did not disappoint, technically I only got 2 as there was an accordion style plant in the box, but thank goodness Russ was sweet enough to share entry 102 with me, so I got to try it. 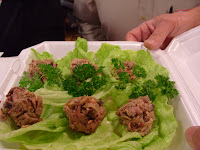 That would not have been allowed at a real contest, where if you touch it, it goes on your plate, no ifs and or butts.

Next up we had pork, where we got to see ice cream scooper style, a style that has thankfully fallen out of favor as that was less than appetizing to me. 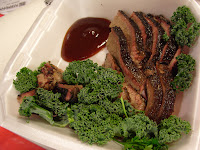 That one actually turned out to have really good flavor, even served chilled, and I would have been happy to eat more than one glob.

Finally, last, but certainly not least, after consuming 9 other meat samples, they passed around the brisket. This one looked beautiful, but had two illegal garnishes, luckily, since this was just a mock contest we could admire it before giving it the disqualifying 1 for appearance. After getting first-hand knowledge of some of the pitfalls we might encounter in the competitive world of BBQ, we took our oath and got certified to judge. 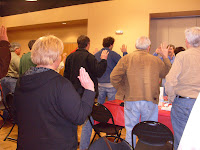 We have been warned that the chances of getting many judging assignments in our first year are pretty slim, but I plan to put my name out there for as many contests as possible, and hopefully start to make a name for myself on the circuit. Unfortunately, if I do, you won't see it here, as all judging is completely confidential in real KCBS contests.
Posted by Emily R. at 6:52 PM