I really don't know why anyone would rave about this place. My experience was bad enough I wouldn't go back. I met a friend, who is in the industry, on a Tuesday night. I made reservations and requested seats at the chef's counter. 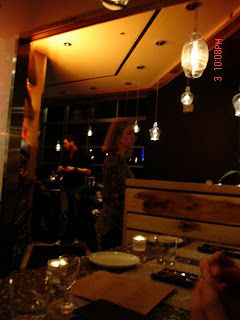 The chef never even acknowledged our existence. I understand that restaurants are busy and he has a lot going on but he never even smiled in our direction. Another drawback, the server for the counter is the service bartender. He was basically unavailable to us all evening because he was busy filing other people's drink orders and he also had zero menu knowledge. When I asked if the burger used grass-fed beef he had to ask 3 or 4 other servers. Of course the chef was standing there and could have easily turned around and said yes or no, but it's obviously more entertaining for him to leave us hanging for 5 minutes as our server runs all over the restaurant asking other people. 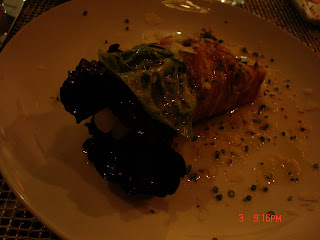 As for the food, I actually enjoyed the tuna tartar on the potato chips, even though the whole thing was so spicy my lips and mouth were on fire and you couldn't taste the tuna at all. I also ordered the white asparagus, which I should have known better than to order as they are not in season yet, but I didn't count on them being so woody they were inedible. I know that it's not that practical to break them by hand in a big restaurant, but then you have to peel them, which is even more time consuming. Unless you just don't care, like at Serpas, then you just serve them as is and your customers get to spit stringy woody pulp onto their plates. Also, the dressing was so overwhelmingly vinegary, you couldn't even taste the ham. For dessert I ordered the pecan tart with Jack Daniels cream. The pecans had a slightly soggy texture, although the crust was a very nice crispy short crust and the cream was about a 1/2 tsp size dollop on the top. 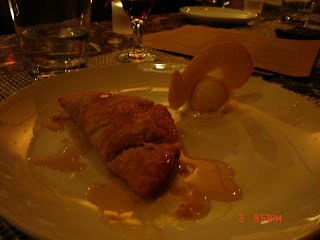 My companion had the fried apple pie, which was my favorite part of the meal, perfect crust to apple ratio and nice tender flaky pastry.

But the best part of the experience was yet to come. As our server was reaching across the counter to shake hands with us while thanking us for coming, he knocked my water glass over and it spilled all over me. I really enjoyed walking out with a giant water mark across my lap and standing outside in the bitter cold waiting upwards of 5 minutes for the valet to bring my car with wet jeans and sweater was not really a high point in my life.
Posted by Emily R. at 5:48 PM